Kids who are being bullied at school may have very real difficulties dealing with these types of games despite the fact that the opponents are just drawn for the screen. The movement of being blocked in my a group of people can be very real lived experience for some people, and may occur on a daily basis. 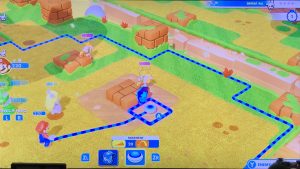 The idea of watching someone or a character being killed may be overwhelming and risk assessments need to be considered before allowing anyone else to play with them or before allowing them to play these types of games. Some individuals can be triggered by the smallest negative comment or lack of feedback or support because you didn’t solve the issue for them. This may then lead to self harm or other significantly challenging behaviours.

Kids or individuals may be cautious when interacting with games with guns in them, whilst others may be very comfortable with them or not aware that there are weapons present in a game. 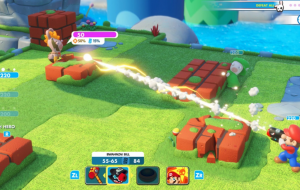 Opponents within a game can be science fiction characters such as dragons who breathe fire and you need to move quickly to make sure that you don’t get burnt / hit by the smoke / fire e.g. Captain Toad Treasure Tracker where the lava rises also rises at the same time.

Being able to choose from multiple characters e.g. Nintendo Tokyo Olympics, allows individuals to look at the different skills of each character and learn about whether those skills are helpful for playing each different type of sport. The vocabulary is great for understanding that this character can move their feet really fast and this character is really slow but is good at. However, it really depends on students actively understanding how to play the game in the first place. Like with car racing games, some might be easier to drive whilst others don’t drive well for beginners, which is a cause of anger / frustration as they can’t compete or share the experience of driving the ‘best’ cars during a conversation with friends because they don’t know how to use the controller and how to drive the course as well resulting in them having more frequent accidents or crashes which may destroy the car completely. 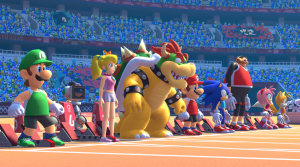 Other opponents may be the timing of events over which you have no control, such as the sequence that happens around you within a story game e.g. simulator games may not pose external events in a way that fits with your real world knowledge of what should happen next, causing you to have to build to the game’s design rather than to the real world e.g. cities skyline. Other games where income is learnt at such a slow rate might be incredibly frustrating when all you want to do is build. Knowing how to get around this feature in the game can result in an individual then playing it for extremely long periods of time or not being able to interact with it at all. 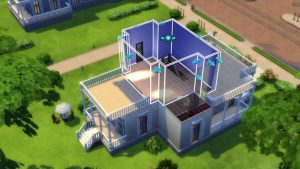 Knowing how to get around a system can be the same kind of strategy as managing an opponent within a game. However, the speed with which things can move can be overwhelming especially when there are real guns involved that are close to homes e.g. Fortnite. 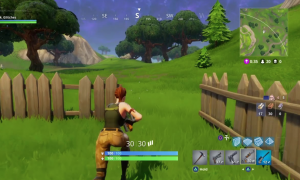 Watching kids play this game (Fortnite) it can become apparent that the primary goal to start with is to take weapons, the best ones early. Those weapons then allow you to cope for others better shooting / sniper skills, as you can use a gun that has bigger fire power to shoot someone who would otherwise win against you.